Two-egg omelette with cheese, thyme and a bit of seasoning. Random, but tasted good to me!

We’ve been in Perth for a little over a week and this morning was probably the first time I made any significant effort to cook a proper breakfast. Andrew loves eggs so I chose to make an omelette with bacon, onion and cheese.

I’m not a huge fan of eating out for breakfast and I had no idea what an omelette was supposed to look like, nor any idea as to its texture, when I made my first one based entirely on a recipe out of one of my cookbooks. I’ve realised that there are different omelette variations and with many dishes, it’s as much about putting your own touches to it as it is about cooking it “right”.

Fillings aside, there are a number of preferences on whether to add water, cream, milk or nothing at all. Personally, I prefer not adding anything in at all and I also prefer not to have the middle runny, not even slightly. Call me strange but something about runny eggs makes me want to gag, especially undercooked egg whites. This one, though, was slightly underdone in the middle since Andrew prefers runny eggs.

A perfect omelette? Not sure. Tasty and a good meal? Definitely. 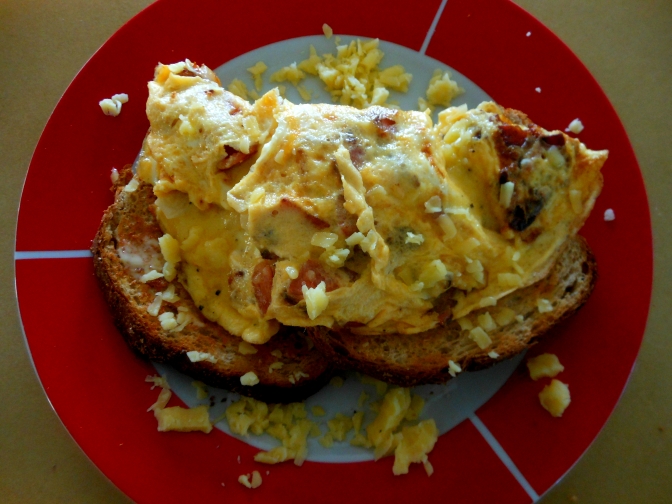