That’s what the yeast was when I went to make my pizza dough. To be truthful, it was way past its best-by date by about a year. The last time I used it was the last time I made pizza, which was apparently so long ago that no one actually remembers it.

Boyfriend: “This is the first time you’ve made pizza eh?”

Mum: “This is the first time you’ve made pizza isn’t it?”

Despite other people’s lack of memory, I do remember making pizza for the first time and one of the things I remember about it was making the pizza sauce, which I made out of tomato paste, crushed tomatoes, herbs, onions and seasoning, cooked for quite a long time (1-2 hours). It felt like it took forever but it tasted really good as a result.

I was running short of time this time around so I thought I’d cheat and just use ready-made pizza sauce. I got home, opened it up and tasted it – way too sour! So I scooped it out onto a frying pan, cooked it with some oregano, olive oil, salt, pepper, onion, garlic and celery for about an hour. Everyone commented on how delicious the kitchen smelt, reinforcing my stubborn insistence on cooking as many things from scratch as I possibly can.

What has completely evaded me though, both last time and this most recent time, is good pizza dough. I don’t have a pizza oven, or own a pizza stone, or have that special 00 flour that a lot of pizza dough recipes recommend. The first time I made pizza, the base was really crispy and hard, which I didn’t actually mind so much, but it made for some serious jaw work. I also have trouble stretching out the dough because it rips, which indicates to me that it’s perhaps not glutinous enough.

The type of base I’d really love to replicate is the chewy, Neopolitan style base. My expectations are zero though, considering my lack of tools in my pizza-making toolbox. That’s until I at least get a good quality pizza stone and some more pizza-making experience.

This time, I followed some suggestions here and set my oven grill on and placed the pizza right under that. I wasn’t initially going to use the frying pan after the pizza had gone into the oven but the dough was undercooked when the pizza came out so I ended up delicately shoving it onto the skillet anyway.

The result? The base wasn’t the consistency I wanted it to be (it came out more like crackers to me! And yes, I did buy new yeast, which worked fine) but everything else tasted really good according to the boyfriend and parents. Considering the base can make or break the pizza, I have a lot of work to do and mastering a decent Neopolitan-style pizza dough is now one of my definite cooking goals.

I have to say though, I’d still much rather make and eat my own homemade pizza with crappy base than go out and buy one from Pizza Hut, Domino’s or Hell Pizza.

Now, I have two things on my Christmas wish-list: new ballroom shoes and a pizza stone 😉 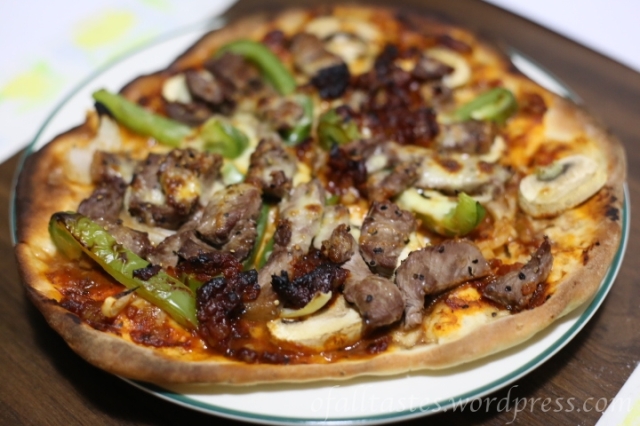 That was after I spent three hours making, for the first time, Vietnamese rice paper rolls. I’m not really sure how many I made in the end – it was enough to fill up three medium plastic plates – but it felt like it took forever. It was fiddly, messy, wet and testing. Testing of how tightly I could roll everything up without ripping the paper; testing of how well I could judge the ratios of all the cucumber, carrots, vermicelli, mint, coriander, mung beans, hoisin + soy + sesame + garlic sauce mix so that I had enough of everything and not too much or too little of anything; and testing of my conviction to finish it all.

I often think to myself when I’m cooking, and in many other situations as well, and I asked myself constantly that day: is this really worth it? Will anyone actually appreciate all the time I put into this?? I tasted the end product a number of times because quite a few of the rolls weren’t done tightly enough so the fillings were prone to falling out, or the paper ripped so the fillings actually did fall out. They needed a bit more flavour but they did taste really refreshing and light. I ended up dripping some sweet chilli sauce over the top in the hope that this would give the rolls more flavour. I assume people enjoyed them because there were none left at the end of the night. But then again, there wasn’t really much left of anything by the end of the night. Dancing makes for hungry play.

From this experience, I would not recommend making these rice paper rolls for an event unless you have a lot of time and delicate handwork. That’s not to say they’re not worth the effort – if made well, with care and good flavours, these can be spectacular – but just remember to be friendly with Time if you do make them.

I looked at two recipes for these rolls:
http://allrecipes.com.au/recipe/2472/vietnamese-rice-paper-rolls.aspx

Also, I didn’t make a dipping sauce. The lovely mums helping out in the kitchen on the night walked around with the food on platters, offering them to the guests, so I don’t think they would have appreciated sloshy dipping sauce spilling everywhere. However, if it’s appropriate definitely make a dipping sauce – it just adds so much more flavour and you don’t want to spend all that time making something bland and uninteresting. 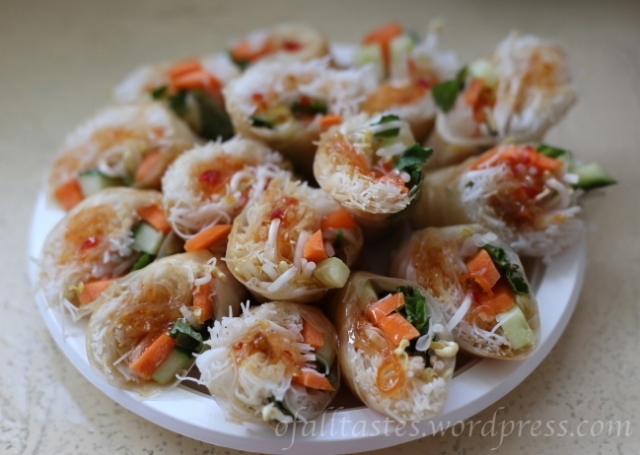 You know the semester’s hit when my blog goes quiet for 2 weeks and then resurfaces with no cooking – just links to food-related blog posts, articles, websites, etc. However, I will be doing some cooking this weekend, if all goes well, and you can’t say I haven’t been trying to keep this ball rolling!

Anyway, I just came across a lighthearted Tumblr blog while writing/procrastinating from writing my first-speaker speech for a debate on Thursday: Hot-Dog Legs. Are they legs or just hot dogs?

I think it’s hilarious but then again, I do have a strange sense of humour sometimes…I swear it’s contributing to my cooking knowledge 😉

Do these supposedly gag-inducing photos of fast food not actually look that bad…?

Have I ever written about my 2-month exchange to Germany? Probably. But, I’ll mention it again. In 2004 I stayed with a German family in Baden-Württemberg as part of a school exchange after their daughter, Stephi, came to NZ and lived at my place for 2 months. Her and her family offered me a lifetime’s worth of experiences and fond memories, for which I will always have my door open to them should they ever venture to this part of the world, or wherever part of the world I may end up in the future.

My eyes and mind broadened with my first dazzling experiences of musical theatre, the bustling glühwein-scented air of German Christmas markets and the magical walk up to Schloss Neuschwanstein where I experienced my first beautiful and delicate snow fall.

It was also the first time I had cornflakes-coated cordon bleu and I remember telling myself that one day, I would learn how to master that amazing coat of crunchy goodness.

While I’m on the topic of German food, German bread is so, so, SO good. If you’re hanging around in the south of Germany, you should make the effort to source out your nearest Fidelisbäck bakery. The smell itself will have you wading in puddles of drool.

Back to the chicken – fast forward 9 years (9 years!!!!?!?!?) and you have me gleefully bashing up 4 cups of cornflakes with a rolling pin in preparation for coating 30 little pieces of chicken nibbles. There’s plenty of recipes out there for cornflake-coated, oven-baked chicken and the one I chose to use was, surprise surprise, by one of the teams who competed on My Kitchen Rules this season.

I upped the amount of cornflakes I used since I had heaps more chicken to work with, I added some additional seasoning (“Roast chicken” seasoning from Masterfoods) and it also took much longer to cook and brown up (about 50 minutes as opposed to 20 in the original recipe). I did have some trouble with getting enough cornflake mix to stick to the pieces but they turned out exceptionally crunchy anyway and they were cooked perfectly to that meat-falling-off-the-bone type state. They probably needed some kind of creamy dipping sauce but I hadn’t thought much past getting the chicken right. One step at a time! 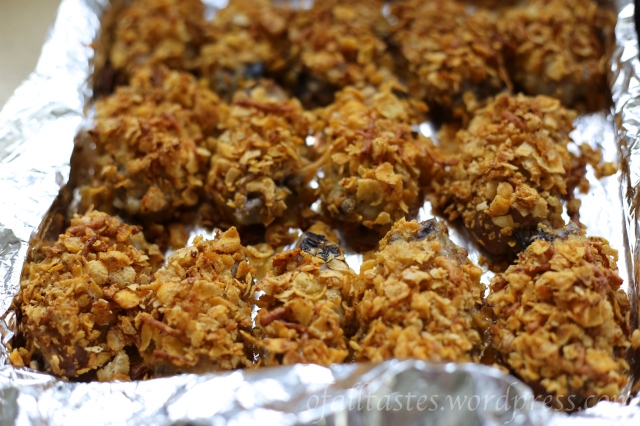 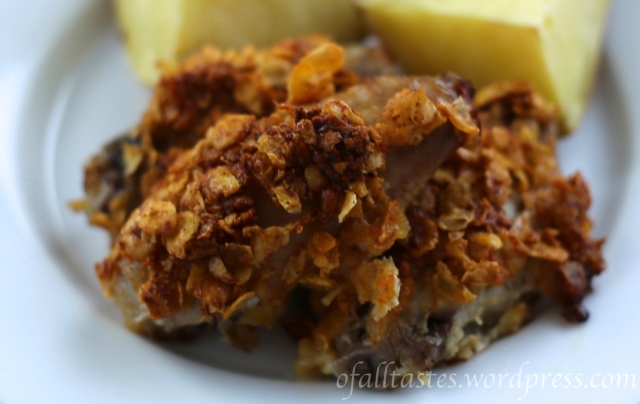